ĀBasuki Abdullah (Surakarta, Central Java 25 January 1915 – Jakarta, 5 November 1993) was an Indonesian painter and a convert to Roman Catholicism from Islam. His work is characterized as realism and has been exhibited in the Indonesian National Gallery.

He received formal training in The Hague. During the Japanese occupation of Indonesia he was an art teacher. After the war he became known internationally, winning an art contest on the occasion of the accession in the Netherlands of Queen Juliana. His status in Indonesia provided an opportunity to paint the official portrait of President Suharto. Abdullah was beaten to death by three assailants during a break-in at his Jakarta home.

Basuki Abdullah (born in Surakarta, Central Java, January 27, 1915 – died in Central Java, November 5, 1993 at the age of 78 years) is one of a master painter Indonesia. He is known as a realist and naturalist painters. He has been appointed as the official painter Merdeka Palace in Jakarta and works adorn palaces and presidential countries Indonesia, in addition to being collectibles from around the world.

Painting talent inherited from his father, Abdullah Suriosubroto, who is also a painter and dancer. While his grandfather was a prominent Indonesian National Awakening Movement in the early 1900s that Wahidin Doctoral Sudirohusodo. Since the age of 4 years Basuki Abdullah began likes to paint some famous figures including Mahatma Gandhi, Rabindranath Tagore, Jesus Christ and Krishnamurti.

Basuki Abdullah formal education acquired in his Catholic and Catholic Mulo in Solo. Thanks to the help of Father Koch SJ, Basuki Abdullah in 1933 obtained a scholarship to study at the Academic Arts (Academie voor Beeldende Kunsten) in Den Haag, The Netherlands, and completed his studies within 3 years with awarded Certificates Royal International of Art (RIA).

In the Government of Japan, Basuki Abdullah joined the Movement Son or the People Power Center which was formed on March 19, 1943. In this Poetra Movement Basuki Abdullah given the task of teaching the art of painting. His students include Kusnadi (painter and art critic Indonesia) and Zaini (impressionist painter). In addition Poetra organization, Basuki Abdullah also active in Keimin Bunka Sidhosjo (a Cultural Center of the Japanese government) together Affandi, S.Sudjoyono, Otto Djaya and Basuki Resobawo.

Abdullah Bosoeki of the Revolution were not in the country that until now has not been clear what lies behind it. Clearly on 6 September 1948 is housed in the Netherlands Amsterdam during the coronation of Queen Juliana which held a contest to paint, Basuki Abdullah defeated 87 European painters and managed to come out as winners.

Since then, the world began to recognize Basuki Abdullah, son of Indonesia that the name of Indonesia. Over in the Netherlands, Basuki Abdullah often traveled around Europe and also had the opportunity to deepen the art of painting by exploring Italy and France, where many resident artists with a worldwide reputation.

Basuki Abdullah famous as a portrait painter, especially painting beautiful women, royal families and heads of state that tends to beautify or embellish a person than the original face. Aside from being an accomplished portrait painter, he too painted landscapes, fauna, flora, the themes of struggle, construction and so on.

Basuki Abdullah held many solo exhibitions both domestically and abroad, among others, his work was exhibited in Bangkok (Thailand), Malaysia, Japan, the Netherlands, England, Portugal and other countries. Approximately 22 countries have Basuki Abdullah painting. Almost all of her life spent abroad including several years living in Thailand and was appointed painter Merdeka Palace and since 1974 Basuki Abdullah settled in Jakarta.

The history of artistic discourse in this country will never forget the actions of this flamboyant painter. We still remember how in the past, and even now, the personality and works of Basuki Abdullah were stigmatized with the label “unique”. And let’s not forget the statement of Sudjojono (the pioneer of the socialist realist tendency in Indonesian art), who declared Basuki a realist painter in the “mooie Indie” (romantic beauty of the Indies) style – a label, or more accurately, a derisive comment, to avoid directly accusing him of lacking nationalist spirit while the revolution for Indonesia’s independence and liberation was under way.

In this show at the National Gallery from late June to early July and entitled “Basuki Abdoellah: Fact and Fiction”, history is again investigated, interpreted, traced and digested. Basuki’s closeness to the world of beauty, perfection of form, and reality is reexamined. The charming female nudes who are even more enchanting than the original, portraits of flawless-looking socialites and nobles, and glorious natural landscapes that delight the eye, actually conceal mysteries. There’s a lot of fresh argumentation behind the hyperbolic aspects in his paintings.

Basuki, a painter whom critics generally associate with a realist/naturalist style, actually (at least according to this show) had a far more complex character; he was not merely a romantic like the European maestros of the past who liked to overstate and dramatize reality. With his certainty as an individual and as a true artist who employed a subjective perspective, Basuki also poured into his work a spirit of heroism and veneration for the myths embodied in local traditions, and had a humanist side and even, often, a spiritual sense – all of this packaged in a very specific compositional approach and set of themes.

We can see this, for example, in a landscape that is richly layered with many elements; not just mountains, a river and rice fields, but also many other details such as animals, plants and even weeds, creating more beauty than is actually needed.

To enliven an apparition of the natural universe, Basuki adds to it with a taste similar to that of the European artists of the romantic era. We see this in his painting of a battle between the wayang figures Gatotkaca and Antasena. Though it is a myth, Basuki adds to the narration in the Mahabharata his own personal effects – waves and a typhoon in the background – much as the English Romantic painter John Martin created such turbulence in his paintings.

Likewise when Basuki paints portraits of women: like Leonardo da Vinci with his Mona Lisa, which tells about the painter’s own childhood and the mysterious symbol of the woman, Basuki, in his portrait of a Mangkunegoro princess, wants to tell us about his own Javanese character, which he shares with the Javanese woman he portrays with such sublimity. Very different from, for example, Sudjojono, when he paints a woman full of reflection in the painting “Di Depan Kelambu” (In front of the Mosquito Net).

From another perspective, as well as producing works with an illustrative character in his female nudes, Basuki quite often presents sacred myths and legends, such as the Queen of the South Sea, Nyi Roro Kidul, or the legend of Joko Tarub and the Seven Celestial Nymphs.

Again, this reminds us that Basuki, personally, saw Indonesia in a different way.

In this exhibition, the curator Mikke Susanto tries to show us how close Basuki’s paintings are in spirit to the portrayals of heroism in Jean-Antoine Gros’s portrait of Napoleon, or Théodore Géricault’s painting of a commander on the field of battle.

So Basuki’s work is not necessarily identical only with a life of glamour and hedonism. Just look at how his painting of the Virgin Mary reflects the painter’s own Christian soul. Basuki sees Mary in a different perspective; not like Western painters who believe in Mary’s glory, but as an Eastern woman with a deeper, more intrinsic divinity. In his picture, after she dies Mary is raised up to heaven as the aura of nature blesses her. This is in line with the eastern belief that nature and humankind share a spiritual character: the microcosm and the macrocosm are one. Basuki shows a volcano erupting as Mary is taken up to heaven.

An exhibition can be read with various interpretations, just as a single painting can elicit thousands of comments. Basuki Abdullah deserves to be remembered in his own special way: a personal approach in giving meaning to life.

This is one of his works that show the strength of mastery of realist techniques. With lighting from the side, figure and a younger sister who was pregnant in her arms rhythm of life drama. With a mastery of proportion and anatomy, this painter who describes their bodies in steady motion lonely journey. The atmosphere was, as they face the GCC clear but his eyes staring blankly. Moreover, their clothes are unpretentious and dark figure in a shroud sisters compassion. From these textual facts, Basuki Abdullah wanted to express empathy to compassion and humanity.

However, the spirit of human compassion in this painting remains in the frame romantisisme. Therefore, more attendance figures sisters sebabagi world idealism intact or even sweet, rather than the sharpness of the painful reality of humanity. Thus the concept of aesthetic choices can be confirmed in all the works of others, Basuki Abdullah. Of the few mythological figures naked body, animal figures, portraits of famous people, or spread of scenery, although built with a dramatization, but all present as a beautiful ideal world full of color and light. 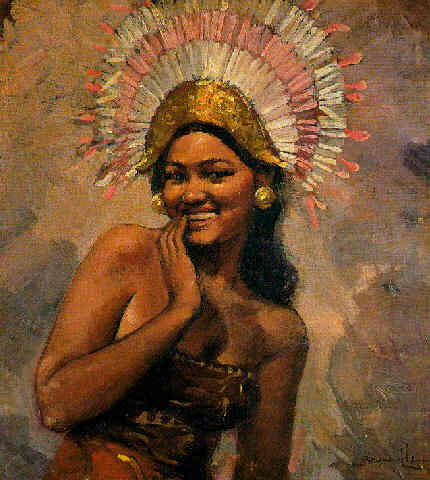 Associated with these aesthetic concepts, Basuki Abdullah, had sharp criticism from Sudjojono. Painting Basuki Abdullah said Mooi Indie filled with the spirit that only deal with beauty and beauty alone. Whereas in those days, the Indonesian nation is facing the occupation, thus living a very bitter reality. Both painters were actually does have a different aesthetic views, so that different ways of giving birth. In fact aesthetic Basuki Abdullah, who supported the ability of high academic techniques and equipment placed as a great painter. It proved a number of awards obtained, also the support from the grassroots to the elite in the palace, and also the survival of his works exist through various periods. 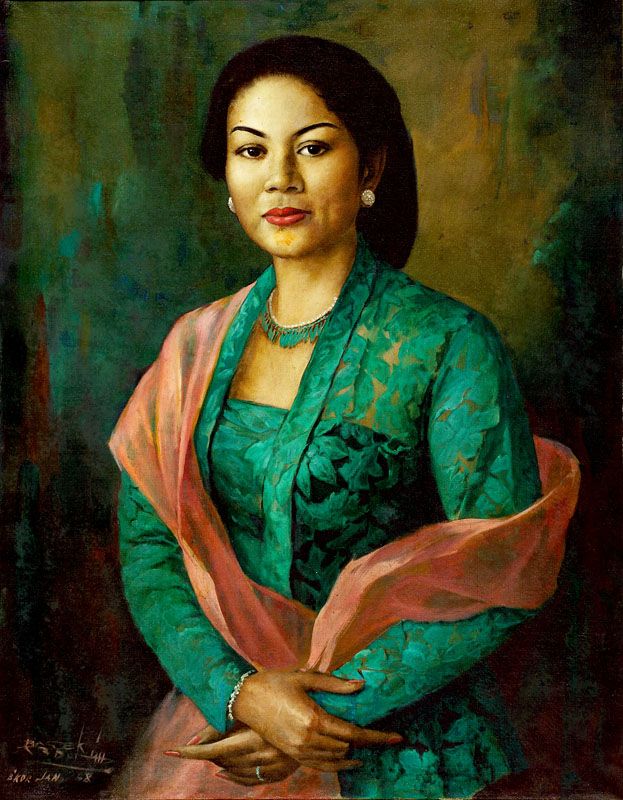