Robert L. Williams (born March 2, 1943) is an American painter, cartoonist, and founder of Juxtapoz Art & Culture Magazine. Williams was one of the group of artists who produced Zap Comix, along with other underground cartoonists, such as Robert Crumb, S. Clay Wilson, and Gilbert Shelton. His mix of California car culture, cinematic apocalypticism, and film noir helped to create a new genre of psychedelic imagery.

Robert L. Williams II was born on March 2, 1943 in Albuquerque, New Mexico to Robert Wandell Williams and Betty Jane Spink at 5:30 AM.

At a very early age he displayed an interest in art, drawing and painting with watercolors. He was enrolled in the Stark Military Academy in the first grade. Perhaps this led to his fascination and collection of World War One German Pickelhaube later in life.Another love instilled in Williams at an early age was car culture. Robert the elder owned “The Parkmore,” a drive-in restaurant complete with carhops and frequented by hot rodders.

Williams himself received his first car, a 34 Ford 5 window coupe, at 12 years of age as a gift from his father. References to this childhood environment can be seen throughout his work as well as in the custom hot rods he would later build himself.The Williams household was one of flux as his parents would marry each other a total of four times and Robert would shuttle between New Mexico and his father’s in Montgomery, Alabama.

Their final separation would come in 1956 with 12-year-old Robert staying with his mother in Albuquerque. His youth was spent delinquently and immersed in hot rods, high jinx, and gangs, which lead to his expulsion from public school in the 9th grade.In an attempt to avoid jail and delinquent destruction, Williams headed to L.A in 1963. Floating on the allure of hot rod culture and affordable art school he landed in classes at Los Angeles City College and worked on the school paper, “The Collegiate”, contributing artwork. It was here he also met his future wife, Suzanne Chorna.Williams moved on to a short stint at The Chouinard Art Institute where he was branded an “illustrator” in a derogatory fashion.

Now married, Williams fled the Art School Tyranny and headed into the professional sector in search of work. Trying to find his niche, Williams designed containers for the Weyehaeuser Corporation and art design for Black Belt magazine before finding his dream job in 1965 in the far out figure of Ed “Big Daddy” Roth and his Rat Fink.

In the late 1960s, while doing advertisements and graphics for Roth, Williams was also a productive oil painter. It was during this period that he was creating his “Super Cartoon” paintings. Including “Appetite For Destruction” and “In The Land Of Retinal Delights” these paintings were meticulously created in the style of the Old Masters including hand-made paints and multiple layers of varnish. These works sold well but were very time consuming to produce, sometimes taking over a year to complete. Many of these paintings were owned by Williams’ patron, James Bruckner Jr., and were on permanent display at the Movie World Cars of the Stars Museum.As Roth’s studio came to a close Williams joined the ZAP Comix collective of artists and flourished in the non-conformist, anti-establishment movement with fellow malcontents R. Crumb, S. Clay Wilson, Spain Rodriguez, Rick Griffin, Gilbert Shelton, and Victor Moscoso.

In 1969 he created his seminal Underground Comix anti-hero, Coochy Cooty. His creation was unleashed in 1970 in Coochy Cooty Men’s Comics and ZAP Comix #5 and is still alive today in Williams’ oil paintings.Many of these comix and “Super Cartoon” paintings were included in Williams’s first ground breaking book, “The Lowbrow Art of Robt. Williams” released in 1979. The title of the book was meant as a statement on the current “Highbrow” tone of the art world and how Williams’ work did not fit in with its ideologies.

In the 1980s Williams caught the frenzied vibe of the punk rock movement and found his next audience. The “Zombie Mystery Paintings” were born in the glow of after-hours clubs and slam pits. The book of the same name influenced and inspired a multitude of artists with the energetic, vibrant, sexy, and ultra-violent images it contained which were in complete contrast to the uptight and exclusive art scene of the day. These works were done quickly, on a rough canvas, and sold via a waiting list system due to demand. In addition to the books, popularity for Williams’ work was established in avant-garde galleries like Billy Shire’s La Luz de Jesus Gallery, Zero One Gallery, and the Tamara Bane Gallery.

In the late 20th and 21st centrury diverse forms of commonplace and popular art appeared to be coalescing into a formidable faction of new painted realism. The phenomenum owed its genesis to a number of factors. The new school of imagery was a product of art that didn’t fit comfortably into the accepted definition of fine art. It embraced some of the figurative graphics that formal art academia tended to reject: comic books, movie posters, trading cards, surfer art, hot rod illustration, to mention a few.

This alternative art movement found its most congealing participant in one of America’s most opprobrious and maligned underground artists, he painter, Robert Williams. It was this artist who brought the term “lowbrow” into the fine arts lexicon, with his ground breaking 1979 book, The Lowbrow Art of Robt. Williams. It was from this point that he seminal elements of West Coast Outlaw culture slowly started to aggregate.

Williams pursued a career as a fine arts painter years before joining the art studio of Ed “Big Daddy” Roth in the mid-1960’s. And as this position as the famous custom car builder’s art director, he moved into the rebellious, anti-war circles of early underground comix.

In 1968, Williams linked up with the infamous San Francisco group that piloted the flagship of the miscreant cartoon world, Zap Comix. Along with Robert Crumb, Gilbert Shelton, S. Clay Wilson, Spain Rodriguez, Victor Moscoso and Rick Griffin, Williams learned to function as an artist outside the walls of conventional art.

Known as the “artist’s artist,” in early punk rock art shows held in after-hours clubs, Robert soon pioneered the first break-away art movement in California since the Eucalyptus School’s estrangement from Impressionism in the late 1920s. His bold use of underground cartoon figuration, paired with harshly contrasted psychedelic colors set a style that was an easily recognizable hallmark throughout the 1980s and 1990s.

Robert Williams’ influence on alternative art is immeasurable. From his endeavors to broaden the possibilities for young artists to gain exposure, sprang the well known art chronicle, JUXTAPOZ magazine. Even with this popular manifesto and landmark publication, Williams’ well meaning machinations still places his work in a lost league of unvindicated ghosts-he’s now an outsider among outsiders. 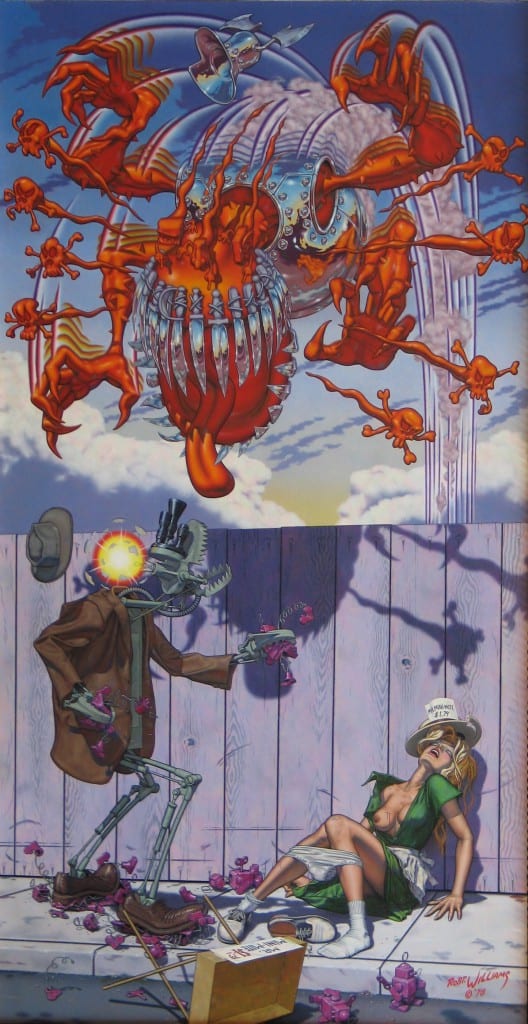 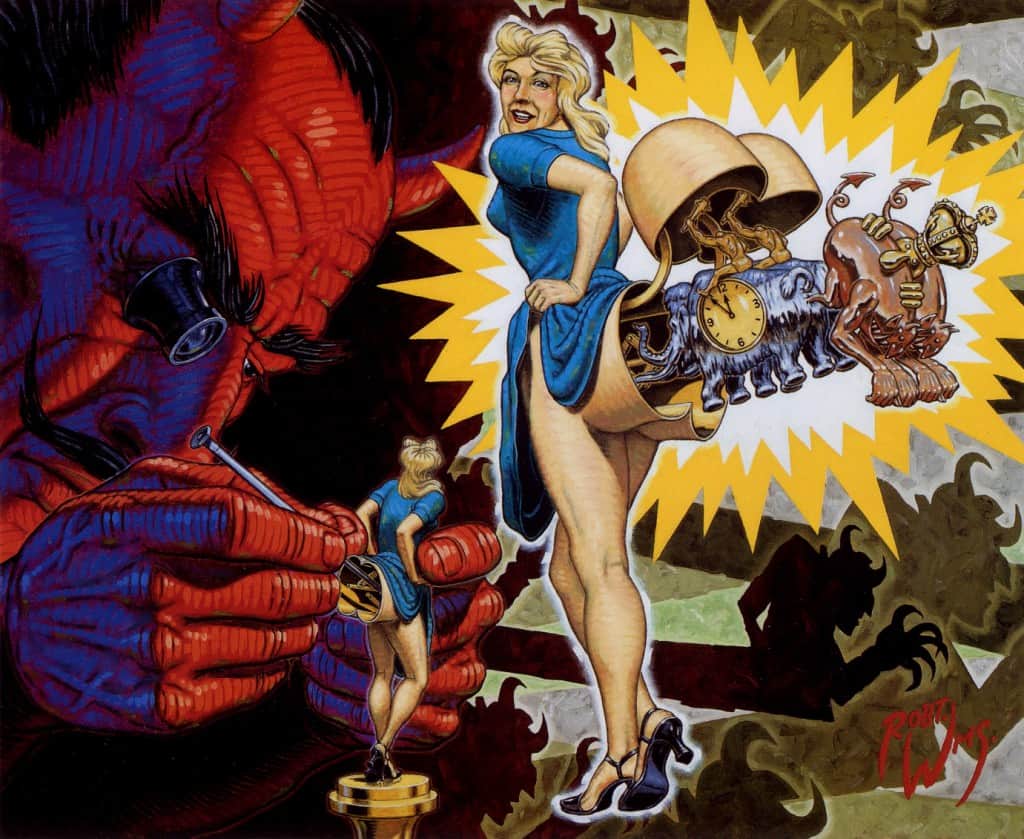 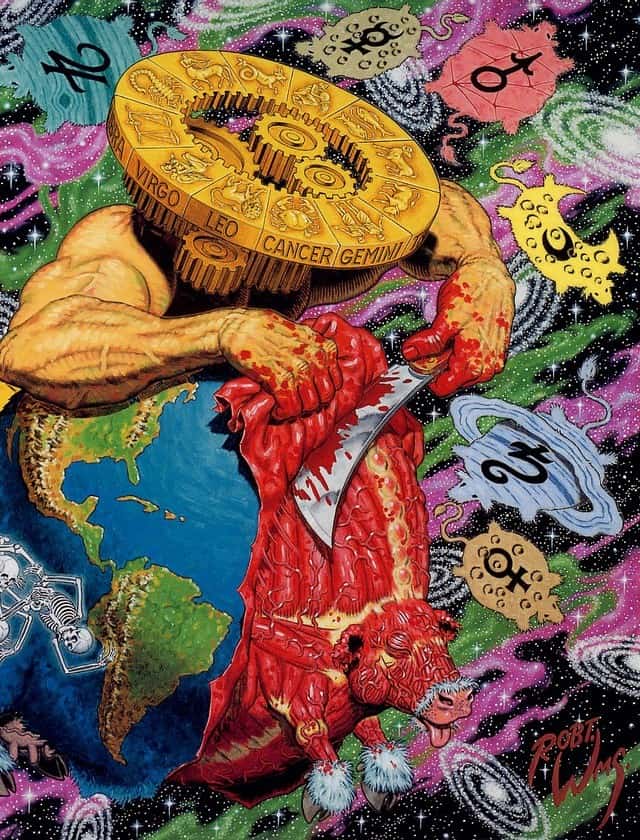