Tiziano Vecelli or Tiziano Vecellio (c. 1488/1490 – 27 August 1576), known in English as Titian was an Italian painter, the most important member of the 16th-century Venetian school. He was born in Pieve di Cadore, near Belluno (in Veneto, Republic of Venice). During his lifetime he was often called da Cadore, taken from the place of his birth.

Titian was an Italian painter and one of the greatest artists of the Renaissance period. Considered as the most important member of the 16th-century Venetian school, Titian painted works for King Philip II, Pope Paul III and the Holy Roman Emperor Charles V. Born to a local modest official in Pieve di Cadore, Titian was sent to live with his uncle in Venice at the age of ten. Subsequently, he developed a keen interest in art and learnt the technique of painting and soon earned the opportunity to work with a few great painters of the era. Around 1518, he was deemed as one of Venice’s leading artists with the completion of ‘Assumption of the Virgin’.

Thereafter, Titian embarked on a prestigious career as a painter, receiving much support in his endeavor by a variety of lofty commissions. Much in demand in the courts of northern Italy around mid-16th century, his reputation spread like wildfire throughout Europe. Recognized as the “first painter” by Emperor Charles V and raised by him to the rank of Count Palatine, he painted astonishing mythology-inspired artwork and also created portraits of some of the leading personalities of the day during his lifetime. Retaining a lifelong interest in color, he continued to project amazing energy through his paintings until his death. Most celebrated for his mastery of color, creative works of Titian had a profound influence on countless future generations of artists.

Titian was born Tiziano Vecellio sometime between 1488 and 1490, in Pieve di Cadore, near Belluno in Italy, to Gregorio Vecellio, and his wife, Lucia. He was the oldest of the four siblings.
After spending his early years in Pieve di Cadore, he was sent to live with his uncle in Venice at the age of ten. While in Venice, he developed an interest towards paintings and decided to become an artist.

Afterwards, he became an apprentice of Sebastiano Zuccato, a Venetian artist. Then, he got the opportunity to work with some of the leading artists of the era such as Giovanni Bellini and later the Giorgione, who proved to be quite influential to the young painter.

After assisting Giorgione on several assignments, Titian obtained his first major independent commission of the three large frescoes in the Confraternity of St. Anthony in Padua. Some of his early works included ‘the Meeting at the Golden Gate’ and ‘the Miracle of Jealous Husband’.

Some of Titian’s early religious works were the ‘Gypsy Madonna’ and the ‘Madonna of the Cherries’, which are remarkable for their application of color. Soon, he established himself as an interpreter of mythology with works such as ‘Flora’ and ‘Sacred and Profane Love’.

Between 1516 and 1518, he completed the ‘Assumption of the Virgin’, a masterwork for the high altar of the Basilica di Santa Maria Gloriosa dei Frari. Shortly after creating this work of art, Titian was commissioned by Alfonso I d’Este, duke of Ferrara, for creating the mythological work ‘The Worship of Venus’.

During 1518–1523, he represented classical mythology through his three paintings for the castle of Alfonso d’Este in Ferrara; the Andrians, the Worship of Venus, and Bacchus and Ariadne. Subsequently, he produced masterpieces such as ‘the Madonna and Child with Saints Francis and Aloysius, the Resurrection altar, and the Pesaro Madonna.

In 1530, he painted his first portrait of the Charles V as Holy Roman emperor while attending the coronation of Emperor. During the next decade, Titian visited Rome at the invitation of Pope Paul III and observed the Renaissance works of Raphael and Michelangelo.

While in Rome, he produced several masterpieces which consisted of ‘Paul III and His Grandsons’, a stunning artwork of a meeting between the aged pope and his scheming grandsons, and ‘Paul III without Berretta’.

Upon returning to Venice, Titian produced works such as ‘Christ Crowned with Thorns’ and ‘Martyrdom of St. Lawrence’. In 1550, Titian went to Augsburg upon the invitation of Charles V and painted the portrait of Prince Philip in armor, a work which set a standard for state portraits.

Between 1550 and 1576, Titian mostly worked for Philip II and painted artworks for the monastery of the Escorial such as the magnificent Crucifixion, the Entombment, and the Adoration of the Kings. Subsequently, Titian obtained many commissions from Philip II for the Escorial including two versions of the Agony in the Garden, and the Last Supper.

During the same period, Titian executed a series of mythological works for Philip II such as ‘Venus and Adonis’, ‘Diana and Actaeon’, ‘Diana and Callisto’, ‘Perseus and Andromeda’, and ‘the Rape of Europa’.

One of his early masterpieces which established Titian as one of the leading painters of the era was ‘Assumption of the Virgin’ (1516-1518). The painting became known for its dexterous use of color and the attractive renderings of the human form.

In his later years, Titian was much devoted to the religious art and painted several mythology-inspired masterworks such as ‘Venus and Adonis’, and ‘Venus and the Lute Player’. Over the years, Titian also created astonishing portraits of few leading figures of the time, Pope Paul III and the Holy Roman Emperor Charles V.

Titian married Cecilia, a barber’s daughter, following an extended affair during which they had two sons, Pomponio and Orazio. After Cecilia’s death in 1530, Titian married again and became the father of a daughter, Lavinia, but his second wife also died. Thereafter Titian’s sister, Orsola Vecellio, took care of the children.

Titian died of plague on August 27, 1576, in his palace in Venice. He was buried in the church of S. Maria Gloriosa dei Frari in Venice.

He was not the great architect or sculptor like Michelangelo, or the inventor and scientist that was Leonardo’s gift, he was just a painter, but a painter who fully utilized colour in his work. Titian’s style did alter throughout his long life but his interest in colour never diminished. His use of paint and brushwork made him the foremost painter in Venice and his execution of both landscapes and portraits brought him great fame in his own lifetime.
Titian seems to have left very few drawings, his work was done on the canvass, altering and modifying as he worked with total control over his medium. His early self portrait of 1510 shows his great skill and handling of paint, and the swollen blue shirt sleeve is a fine example of his genius.

This famous painting is thought to be the image of a bride alongside the invisible nude Venus. It represents the joys of marriage and clearly owes much to the influence of Giorgione. The Venus is just one example of the eroticism that permeates the artist’s rather fleshy works, images that he clearly enjoyed painting.

In 1518 he painted his “Assumption of the Virgin” the altarpiece for the Basilica di Santa Maria Gloriosa dei Frari in Venice. Also in the same church but painted in 1519-1528, his “Pesaro Madonna” is unusual in that it places the Holy Virgin out of the center of the picture, this was unheard of at the time.

After the death of Giorgione and Giovanni Bellini, Titian became the foremost painter in Venice. His work is varied and includes portraits, mythological works, and altarpieces (as seen in the examples below) Only Michelangelo’s fame was greater among the artists of sixteenth century Italy.

In 1523 the great artist was at the height of his fame and painted his Bacchus and Ariadne, part of his mythological series for Alfonso d’Este the Duke of Ferrara. Bacchus, the god of wine, has fallen in love with Ariadne and leaps from his chariot to greet her. She has been abandoned on the island of Naxos by her lover Theseus whose ship can be seen sailing away in the distance. Despite Ariadne’s initial fear of Bacchus she is raised to heaven in his chariot (drawn by two cheetahs) and turned into a constellation represented by the stars at the top left of the painting. 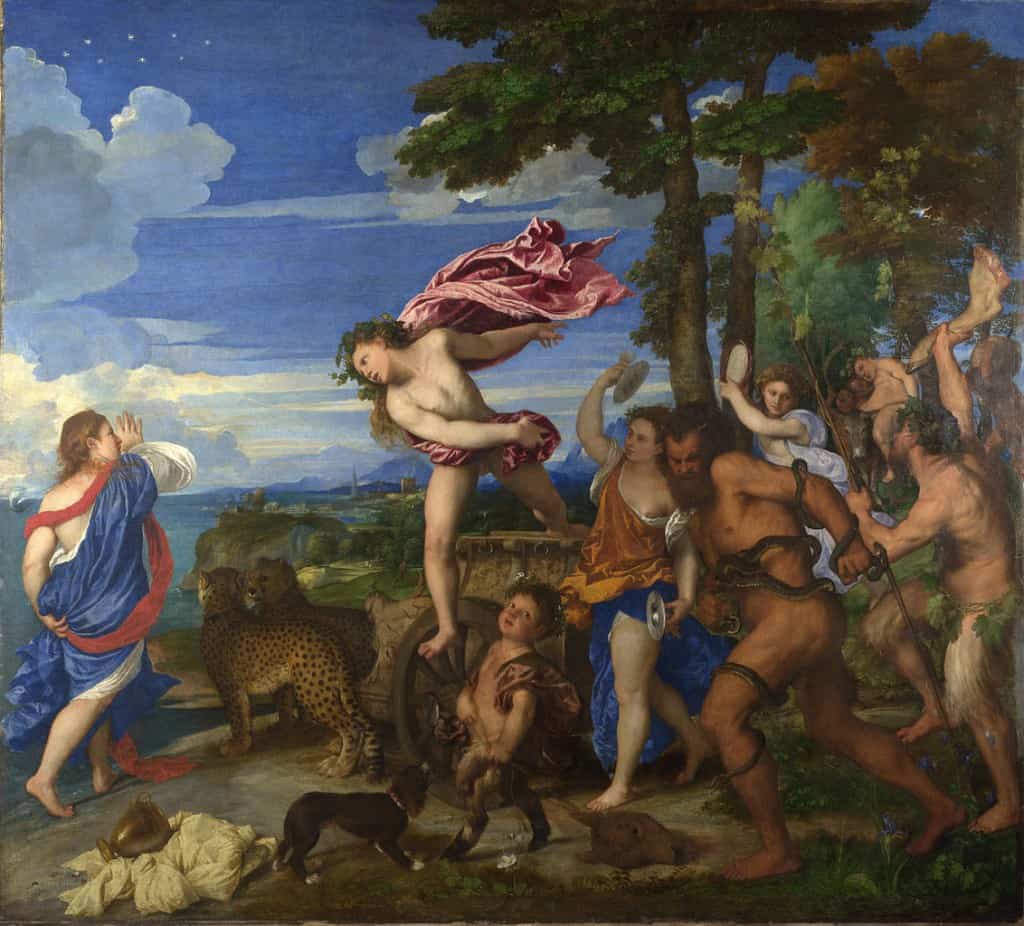 Titian became acquainted with the playwright and poet Pietro Aretino and painted his portrait several times.

Aretino was a writer who scandalised Italy with his outspoken comments on the political and social life at the time. He is regarded as the first pornographic journalist but was also a great champion of the artist’s painting and praised his work for it’s depiction of reality and colour. 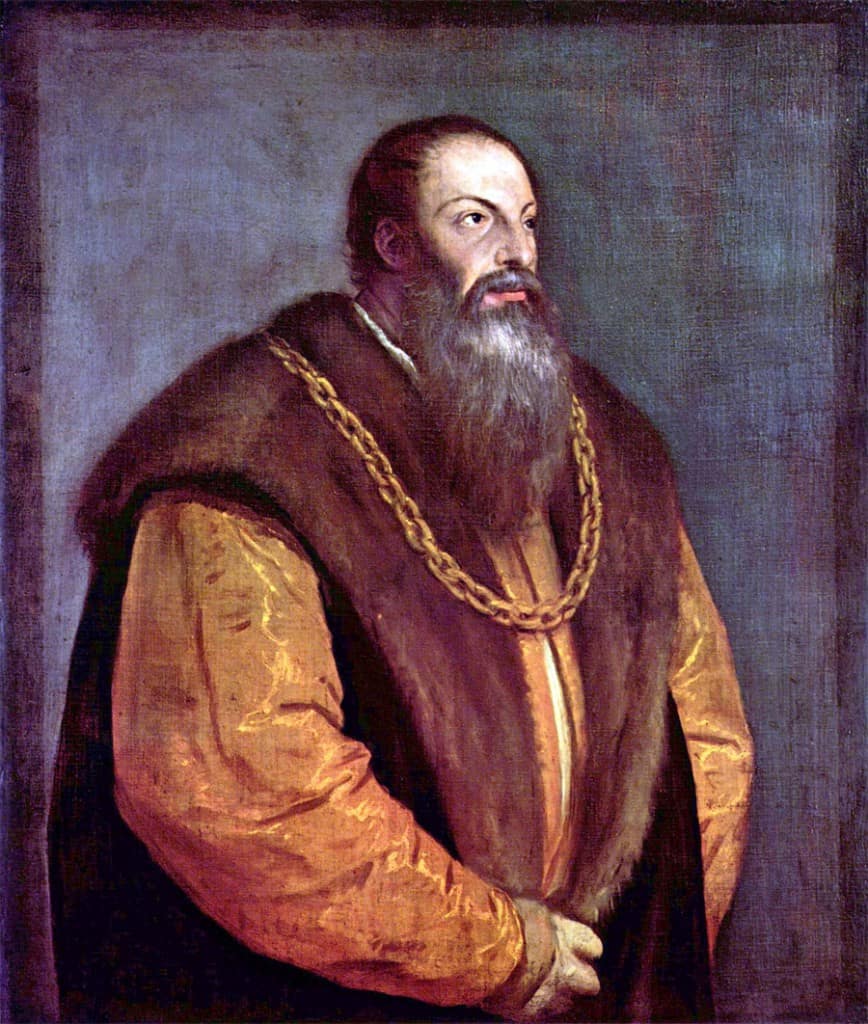 Titian was married in 1525 to “Cecilia” and the couple had three or possibly four children one, Orazio, became the artist’s assistant.

The Venus of Urbino of 1538, now in the Uffizi Gallery in Florence, shows the naked figure reclining on a bed and the pose is based on Giorgione’s sleeping Venus. 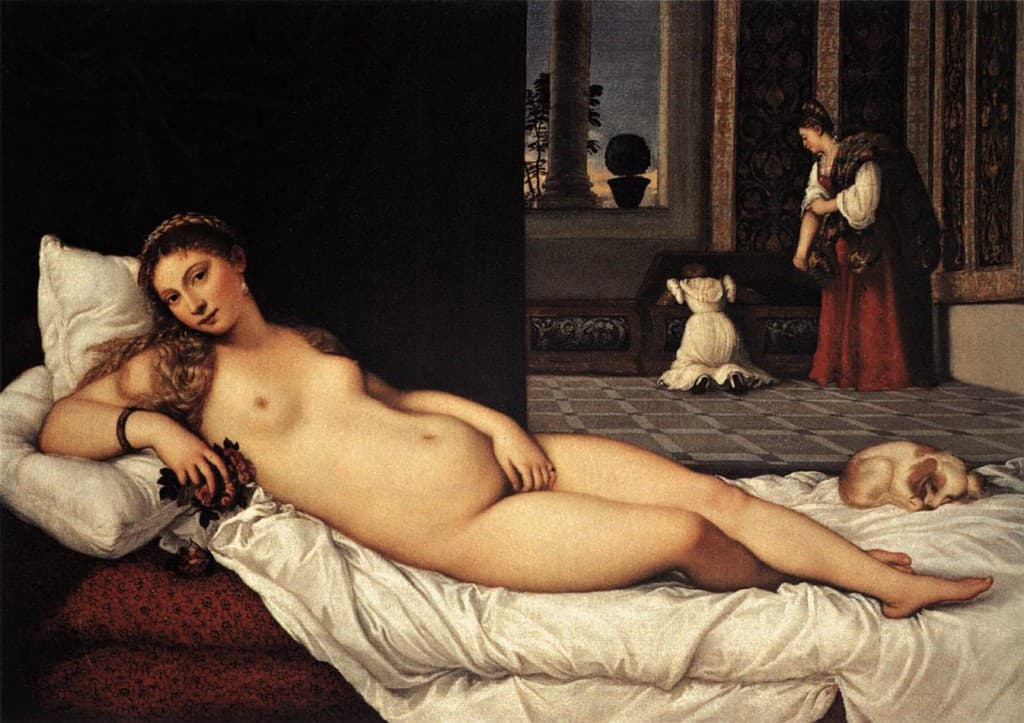 The artist was extremely successful and was even given the freedom of the city of Rome during a visit in 1546. The last twenty-five years of Titian’s life were spent mainly as a portrait-painter and in the service of Philip II of Spain. He had painted Philip’s portrait in 1550 and had also painted Philip’s father The Holy Roman Emperor, Charles V.

The artist’s later paintings are executed with great freedom. He was so comfortable with his medium that one of his pupils, who had watched him work, stated that he finished the pictures ‘more with his fingers than his brush’.

Titian’s influence is extensive and his legacy is his use of rich colour and artists such as Rubens, Rembrandt, and Manet have taken inspiration from his work.

Sometime in the early 1520s Titian brought to his house in Venice a young woman from Cadore whose name was Cecilia. Two sons were born in 1524 and 1525, first Pomponio, who became a priest, and second Orazio, later a painter and Titian’s chief assistant. During Cecilia’s grave illness in 1525, Titian married her. She recovered and later gave birth to two daughters, Lavinia (born 1529/30) and another who died in infancy. On Cecilia’s death in 1530, the artist was disconsolate and he never remarried.

It is not bright colors but good drawing that makes figures beautiful.

He who improvises can never make a perfect line of poetry.

The painter must always seek the essence of things, always represent the essential characteristics and emotions of the person he is painting…

Painting done under pressure by artists without the necessary talent can only give rise to formlessness, as painting is a profession that requires peace of mind.