Candido Portinari (Dec 1903 – Feb 1962) is considered one of the most popular and important Brazilian painters of all time. His artwork not only raised global awareness regarding the realities of Brazil but also caused a change in mindset for the incoming generation.

The influential practitioner garnered a global reputation thanks to his neo-realism style of painting. Till the time of his death, he is said to have painter over 5,000 canvases, one of the biggest art collections from a single individual. This includes small sketches as well as great monumental murals that captured the attention of the world.

Colhedora de Café (Colhedores de Café) is one of his popular works and below is its overview. 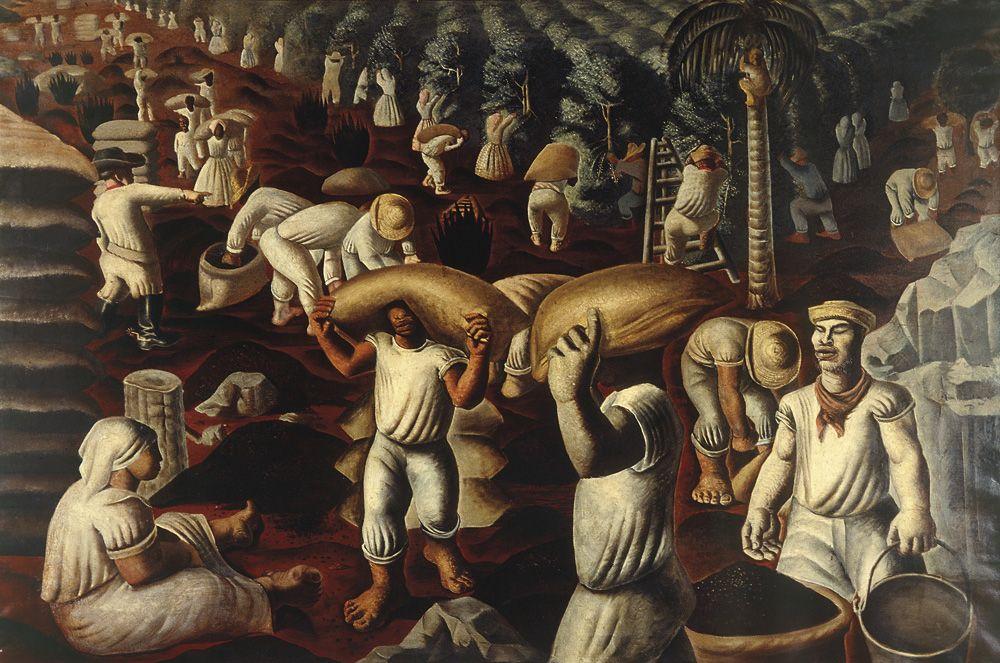 Candido Portinari created Colhedores de Café with an earthy-like composition. His brushes made soft and solid strokes of gray, black, ochre, rose, white, and subtle yellow tones. While the coffee farm workers are seen to be in an extremely demanding environment, carrying the heavy sacks of coffee, he uses a contrasting smooth texture.

On the left side of the foreground, a woman is seen sitting on the floor, with her face projected to other workers. She is barefoot, just like most of the workers and wearing a rag on her head with a white dress.

On the extreme right-hand side, there is a male worker with an empty bag, moving towards an opened coffee sack. He has a brownish cap and neckerchief in addition to white pants and a shirt. Centrally located at the foreground of this painting are two male coffee carriers with sacks on their heads. They are in white shirts and pants with one facing the left side while the other is looking forward.

On the extreme background, there numerous coffee workers working on the plantation. There is also what seems to be a palm tree with a man on top of it while there is another man close by on a ladder, facing the direction of the coffee workers on the plantation. Lastly, there is a man (seems to be a supervisor) wearing black boots with white attire in addition to a cap. His outstretched right arm is pointing to another worker.

Portinari was a son of immigrants and he was born in one of the coffee plantations. His art interests were significantly influenced by his surroundings. He also at one point described himself as the son of the red earth. So, his focus was to paint the bare and crude reality of Brazilians, including the immigrant farmworkers.

As Portinari clearly depicts this on Colhedores de Cafe, life wasn’t easy. The workers in this painting were subjects to extremely hard working conditions on the coffee farms, carrying heavy sacks of coffee, harvesting coffee beans, and collecting them. They were also working barefoot under not so friendly mounds of soil while still under supervision.

Colhedora de Café captures people as they were, their bodies that feature large arms and legs. There are also red and brown hues of land and hence the painting effectively depicts “realism.”

There are many themes that come to play when looking at this painting portrait. The main one that stands out is the plight of a coffee farm worker, especially the blacks. This can be categorized under race, social status, poverty, as well as profession.

Note: Portinari didn’t come from a wealthy background and so life as a child of an immigrant in Brazil wasn’t easy. But his deep desire to highlight the reality around home propelled him to greater heights thanks to his artwork. He ended up influencing the next generation of Brazilians’ especially artists, poets, and musicians.

Other Candido Portinari’s Work that Relate to Colhedora de Café

Portinari had a significant collection of artwork. However, some of his pieces of work had strong interrelations, highlighting similar themes such as coffee, farmworkers, immigrants, and poverty. Some of his other works include:

Colhedora de Café painting (also sometimes labeled as “coffee”) effectively captures realism as well as socialism. The painting depicts the real working conditions of the coffee farmworkers, which wasn’t anything easy to go by.

They are tasked, under supervision, to harvest and carry the heavy sacks of beans on their heads. Besides that, the job depicts their social status which was the lowest and hence they were subjected to a crude working environment. Even after his death, Portinari’s paintings did spark a shift in mindset by raising global awareness.