Facts and Myths about Ivan Aivazovsky. Everything You Need to Know. A collection of 729 paintings (HD)

Very few of our readers are from Russia, but I think the name of Aivazovsky is well-known all over the world. Today we have prepared research for you about this amazing person.

It seems that there is no such person who would not have heard the name of this artist. If you ask your friend, relative or acquaintance, usually, their answers will be something like “Yes, I heard something. He is the one who painted the sea.” Undoubtedly, it was the landscapes that glorified Ivan Konstantinovich. Throughout his life, he painted more than 5,000 paintings and organized more than 189 solo exhibitions. But not everyone knows this fact. 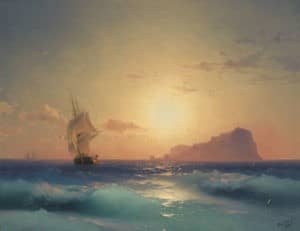 The real name of the artist is Hovhannes Ayvazyan. The father of the future master, Konstantin (Gevorg), an Armenian by origin, after moving to Feodosia wrote the name in the Polish manner: “Gayvazovsky”. Until the 40s, one could even see the signature “Guy” in the master’s paintings – an abbreviation for the surname. But in 1841 the artist finally changed his name and officially became Ivan Konstantinovich Aivazovsky as we know him.

Do you think he was only a painter? Nope! He was passionate about music either.

The painting was not the only talent of Ivan Aivazovsky. Among his hobbies was music, he adored playing the violin. During home receptions in the circle of close friends, he often pleased guests with his game. They say that somehow one of these family concerts got to Russian composer Mikhail Glinka. He liked Tatar motifs played by Aivazovsky so much that he later included in his opera Ruslan and Lyudmila a small passage played by the artist.

He is the one who painted the famous sea painting, but did he ever see the sea?

Yes, yes, yes! Aivazovsky was born and raised in the Crimea and since childhood, he loved to look at the sea. Moreover, when he studied at the gymnasium in the capital, he really missed the house. Most likely, a beautiful legend appeared after the artist said that it was impossible to draw from nature all the greatness of the sea, to convey its beauty, bursts of waves. Therefore, Ivan Konstantinovich often painted his creations from memory. The windows of the workshop where he worked overlooked the courtyard, not the shore. 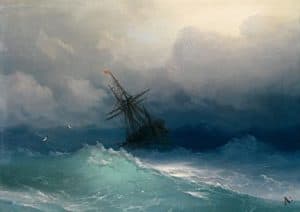 The design was his another passion.

Aivazovsky didn’t care for get-togethers, inclining toward calm family nights. In any case, if he held gatherings, he attempted to surprise his visitors with something extraordinary. Together with the cook, the craftsman picked the menu for the meal and, it is said, even designed unique names for dishes. Visitors were served treats named after his artistic creations: Black Sea soup, Harbor pies, Sea of ​​Azov sauce, Capri greens, Vesuvius punch, North Sea dessert, From quiet to tropical storm champagne. The maestro had a specific shortcoming absolutely for champagne, this beverage was served each time in an exceptional manner. The craftsman expelled industrial facility names from bottles ahead of time and painted new ones in their place. It is anything but difficult to figure that regularly they delineated a fuming ocean component.

“Confusion in the Vatican”

They state that Aivazovsky carried turmoil to Europe. This expression peers of the craftsman talked jokingly. The truth of the matter is that once the Pope saw the artistic creation of “Confusion. Formation of the World “, possessed by the ace. He was so propelled by the creation that he needed to purchase a work, yet the craftsman gave the pontiff his work as a blessing. This liberal signal was acknowledged in Europe, and afterwards, the name of Aivazovsky first shook the entire world. Gogol kidded about this: “You, a little man, originated from Rome to the banks of the Neva and promptly raised Chaos to the Vatican.” Now the canvas is in the gallery on the island of St. Lazarus in Venice.

The first in the Louver

It was Ivan Aivazovsky who turned into the main Russian craftsman whose works of art were introduced at a display in the Louver. A little later he was granted the lofty honour – the gold decoration of the French Academy. Incidentally, presently the works of art of the marine painter are esteemed everywhere throughout the world no less. On April 24, 2012, the Sotheby’s closeout house sold Ivan Aivazovsky’s painting “Perspective on Constantinople and the Bosphorus Bay” for $ 5.2 million. This composition was the most costly work of the craftsman.

Adopted his own grandson 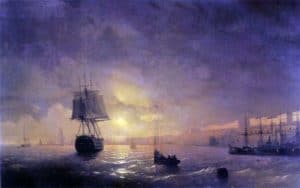 Odessa at night by Ivan Aivazovsky

The first spouse gave the craftsman four girls. What’s more, those, thus, made Aivazovsky content with ten grandkids. The craftsman cherished his youngsters and grandkids without a doubt, was occupied with their childhood and training, however, he was unable to overlook that he had no official beneficiaries.

Prior to his demise, he composed an appeal to Emperor Nicholas II: “I have no children, yet God remunerated me with girls and grandkids. Needing to spare my family, bearing the name Aivazovsky, I received my grandson, the child of my oldest girl, Alexander Lantry. I set out to ask the embraced grandson Alexander to give my name, together with the escutcheon and the benefits of an honourable family. ” The sovereign went to meet him, yet Aivazovsky himself didn’t hang tight for this answer. Mikhail Aivazovsky is the main grandson of the marine painter who bears the name of his well-known precursor. Coincidentally, he followed in the strides of his granddad and turned into a craftsman.

On the morning of April 19, 1900, the craftsman routinely settled at the easel in his workshop in Feodosia. A clear canvas was extended on a little cot. Aivazovsky chose to satisfy his long-standing want – to indeed show one of the scenes of the freedom battle of the Greek dissidents against the Turks. He nearly completed that day. In the focal piece of the image, he portrayed a boat wrapped on fire and puffs of smoke. In any case, he didn’t have the opportunity to finish the arrangement. The previous evening in a fantasy, abrupt demise cut off the life of the painter of the oceans. The incomplete artwork “Blast of the Ship” stayed on the easel.