Michelangelo di Lodovico Buonarroti Simoni (March 1475 – 18 February 1564), was an Italian sculptor, painter, architect, poet, and engineer of the High Renaissance who exerted an unparalleled influence on the development of Western art. Considered to be the greatest living artist during his lifetime, he has since also been described as one of the greatest artists of all time.

Despite making few forays beyond the arts, his versatility in the disciplines he took up was of such a high order that he is often considered a contender for the title of the archetypal Renaissance man, along with contemporary rival and fellow Florentine Medici client, Leonardo da Vinci.

Michelangelo: detail of ceiling fresco Michelangelo was considered the greatest living artist in his lifetime, and ever since then he has been held to be one of the greatest artists of all time. A number of his works in painting, sculpture, and architecture rank among the most famous in existence. Although the frescoes on the ceiling of the Sistine Chapel are probably the best known of his works today, the artist thought of himself primarily as a sculptor. His practice of several arts, however, was not unusual in his time, when all of them were thought of as based on design, or drawing. Michelangelo worked in marble sculpture all his life and in the other arts only during certain periods. The high regard for the Sistine ceiling is partly a reflection of the greater attention paid to painting in the 20th century and partly, too, because many of the artist’s works in other media remain unfinished.

A side effect of Michelangelo’s fame in his lifetime was that his career was more fully documented than that of any artist of the time or earlier. He was the first Western artist whose biography was published while he was alive—in fact, there were two rival biographies. The first was the final chapter in the series of artists’ lives (1550) by the painter and architect Giorgio Vasari. It was the only chapter on a living artist and explicitly presented Michelangelo’s works as the culminating perfection of art, surpassing the efforts of all those before him. Despite such an encomium, Michelangelo was not entirely pleased and arranged for his assistant Ascanio Condivi to write a brief separate book (1553); probably based on the artist’s own spoken comments, this account shows him as he wished to appear. After Michelangelo’s death, Vasari in a second edition (1568) offered a rebuttal. While scholars have often preferred the authority of Condivi, Vasari’s lively writing, the importance of his book as a whole, and its frequent reprinting in many languages have made it the most usual basis of popular ideas on Michelangelo and other Renaissance artists. Michelangelo’s fame also led to the preservation of countless mementos, including hundreds of letters, sketches, and poems, again more than of any contemporary. Yet despite the enormous benefit that has accrued from all this, in controversial matters often only Michelangelo’s side of an argument is known.

From his childhood Michelangelo was drawn to the arts, but his father considered this pursuit below the family’s social status and tried to discourage him. However, Michelangelo prevailed and was apprenticed (worked to learn a trade) at the age of thirteen to Domenico Ghirlandaio (1449–1494), the most fashionable painter in Florence at the time.

After a year Michelangelo’s apprenticeship was broken off. The boy was given access to the collection of ancient Roman sculpture of the ruler of Florence, Lorenzo de’ Medici (1449–1492). He dined with the family and was looked after by the retired sculptor who was in charge of the collection. This arrangement was quite unusual at the time.

Michelangelo’s earliest sculpture, the Battle of the Centaurs (mythological creatures that are part man and part horse), a stone work created when he was about seventeen, is regarded as remarkable for the simple, solid forms and squarish proportions of the figures, which add intensity to their violent interaction. 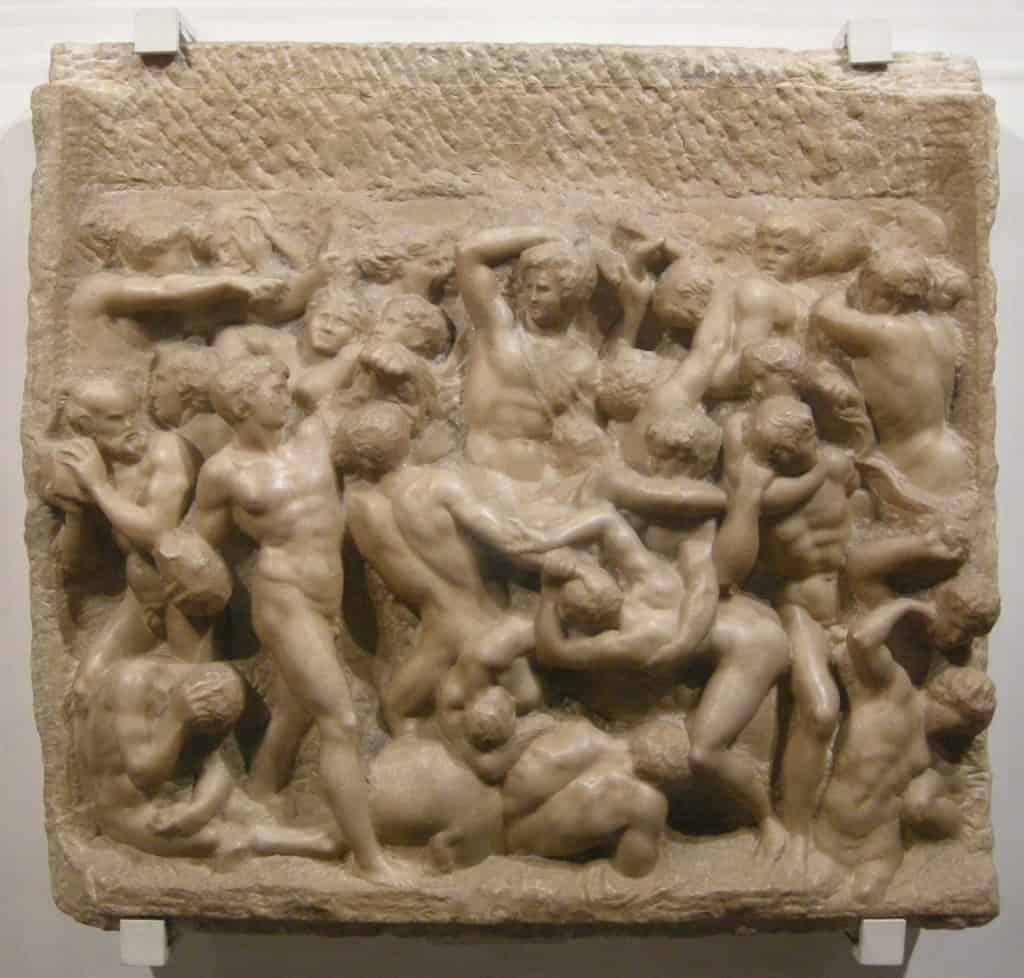 Soon after Lorenzo died in 1492, the Medici family fell from power and Michelangelo fled to Bologna. In 1494 he carved three saints for the church of San Domenico. They show dense forms, in contrast to the linear forms which were then dominant in sculpture.

After returning to Florence briefly, Michelangelo moved to Rome. There he carved a Bacchus for a banker’s garden of ancient sculpture. This is Michelangelo’s earliest surviving large-scale work, and his only sculpture meant to be viewed from all sides.

In 1498 the same banker commissioned Michelangelo to carve the Pietà now in St. Peter’s. The term pietà refers to a type of image in which Mary supports the dead Christ across her knees. Larger than life size, the Pietà contains elements which contrast and reinforce each other: vertical and horizontal, cloth and skin, alive and dead, female and male.

On Michelangelo’s return to Florence in 1501 he was recognized as the most talented sculptor of central Italy. He was commissioned to carve the David for the Florence Cathedral. 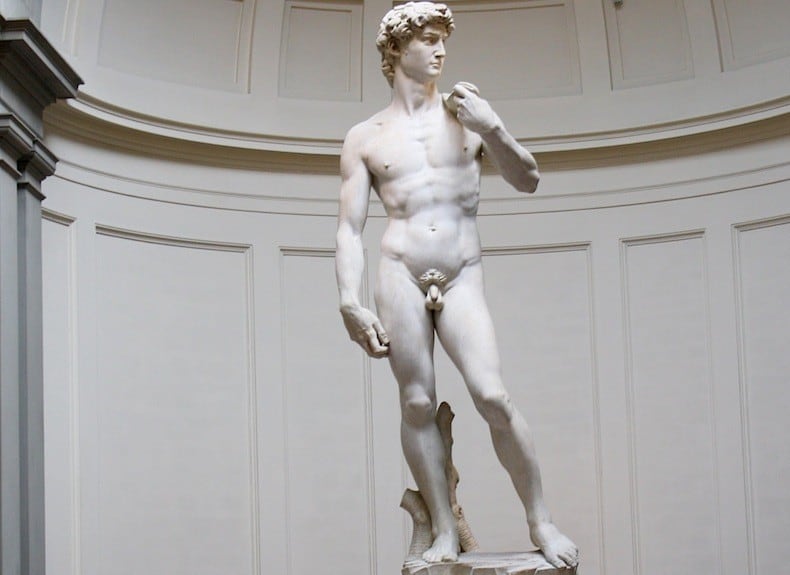 Michelangelo’s Battle of Cascina was commissioned in 1504; several sketches still exist. The central scene shows a group of muscular soldiers climbing from a river where they had been swimming to answer a military alarm. This fusion of life with colossal grandeur henceforth was the special quality of Michelangelo’s art.

From this time on, Michelangelo’s work consisted mainly of very large projects that he never finished. He was unable to turn down the vast commissions of his great clients which appealed to his preference for the grand scale.

Pope Julius II (1443–1513) called Michelangelo to Rome in 1505 to design his tomb, which was to include about forty life-size statues. Michelangelo worked on the project off and on for the next forty years. 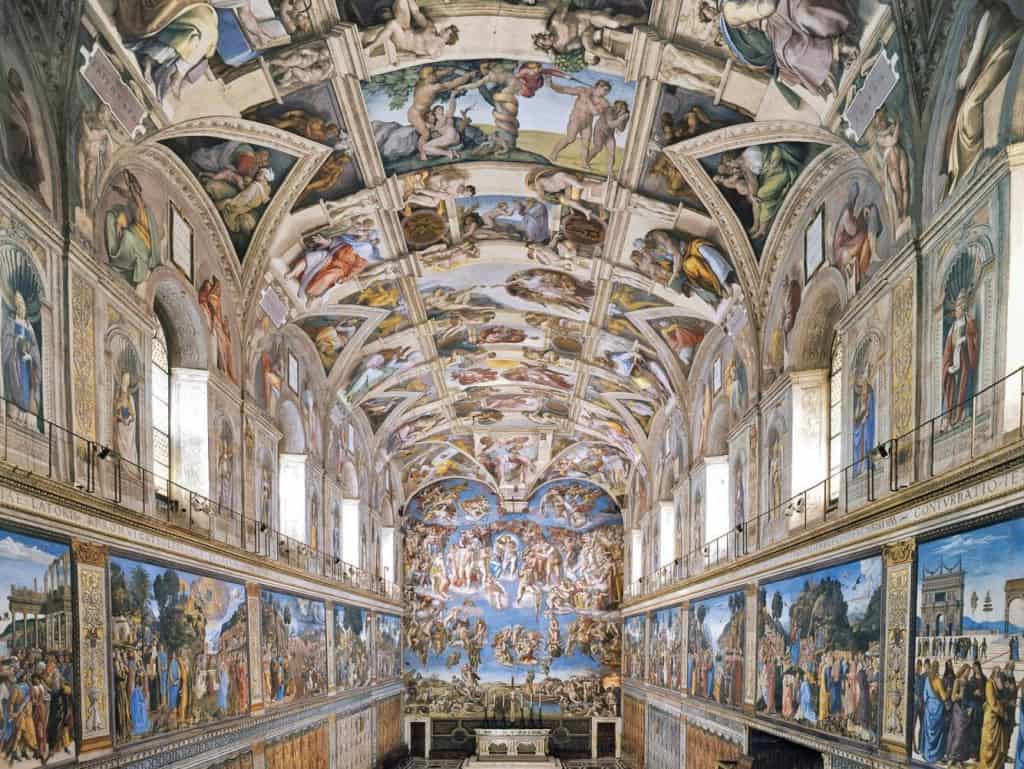 In 1508 Pope Julius II commissioned Michelangelo to decorate the ceiling of the chief Vatican chapel, the Sistine. The traditional format of ceiling painting contained only single figures. Michelangelo introduced dramatic scenes and an original framing system, which was his earliest architectural design. The chief elements are twelve male and female prophets (the latter known as sibyls) and nine stories from Genesis.

Michelangelo stopped for some months halfway along. When he returned to the ceiling, his style underwent a shift toward a more forceful grandeur and a richer emotional tension than in any previous work. The images of the Separation of Light and Darkness, and Ezekiel illustrate this greater freedom and mobility.

After the ceiling was completed in 1512, Michelangelo returned to the tomb of Julius and carved a Moses and two Slaves. His models were the same physical types he used for the prophets and their attendants in the Sistine ceiling. Julius’s death in 1513 halted the work on his tomb.

Pope Leo X, son of Lorenzo de’ Medici, proposed a marble facade for the family parish church of San Lorenzo in Florence to be decorated with statues by Michelangelo. After four years of quarrying and designing the project was canceled. 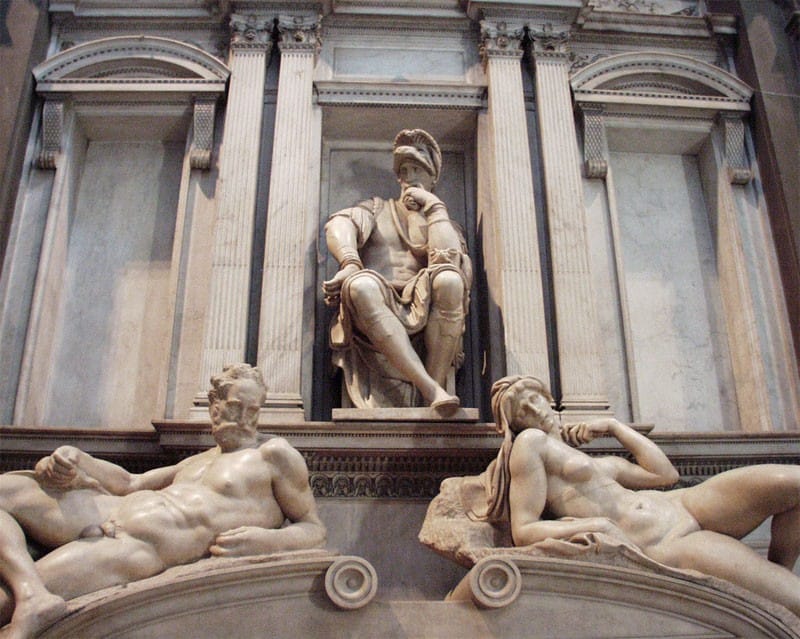 In 1520 Michelangelo was commissioned to execute the Medici Chapel for two young Medici dukes. It contains two tombs, each with an image of the deceased and two allegorical (symbolic) figures: Day and Night on one tomb, and Morning and Evening on the other.

A library, the Biblioteca Laurenziana, was built at the same time on the opposite side of San Lorenzo to house Pope Leo X’s books. The entrance hall and staircase are some of Michelangelo’s most astonishing architecture, with recessed columns resting on scroll brackets set halfway up the wall and corners stretched open rather than sealed.

Michelangelo wrote many poems in the 1530s and 1540s. Approximately three hundred survive. The earlier poems are on the theme of Neoplatonic love (belief that the soul comes from a single undivided source to which it can unite again) and are full of logical contradictions and intricate images. The later poems are Christian. Their mood is penitent (being sorrow and regretful); and they are written in a simple, direct style.

In 1534 Michelangelo left Florence for the last time, settling in Rome. The next ten years were mainly given over to painting for Pope Paul III (1468–1549). In 1536 Michelangelo began the Last Judgment, for Pope Paul III, on the end wall of the Sistine Chapel. The design shows some angels pushing the damned down to hell on one side and some pulling up the saved on the other side. Both groups are directed by Christ. The flow of movement in the Last Judgment is slower than in Michelangelo’s earlier work. During this time, Michelangelo also painted frescoes in the Pauline Chapel in the Vatican (1541–1545).

Michelangelo devoted himself almost entirely to architecture and poetry after 1545, including rebuilding of the Capitol area, the Piazza del Campidoglio, for Pope Paul III. The pope also appointed Michelangelo to direct the work at St. Peter’s in 1546. The enormous church was planned to be an equal-armed cross, with a huge central space beneath the dome. Secondary spaces and structures would produce a very active rhythm. By the time Michelangelo died, a considerable part of St. Peter’s had been built in the form in which we know it.

Michelangelo’s sculpture after 1545 was limited to two Pietàs that he executed for himself. The first one, begun in 1550 and left unfinished, was meant for his own tomb. He began the Rondanini Pietà in Milan in 1555, and he was working on it on February 12, 1564 when he took ill. He died six days later in Rome and was buried in Florence.

Michelangelo excelled in poetry, sculpture, painting, and architecture. He was the supreme master of representing the human body. His idealized and expressive works have been a major influence from his own time to ours.

An artist must have his measuring tools not in the hand, but in the eye.

Beauty is the purgation of superfluities.

I sometimes set myself thinking and imagining that I find amongst men but one single art or science, and that is drawing or painting, all others being members proceeding therefrom.

– why he had not married…
I have a wife too many already, namely this art, which harries me incessantly, and my works are my children.

True art is made noble and religious by the mind producing it.

Only God creates. The rest of us just copy.

My soul can find no staircase to heaven unless it be through earth’s loveliness.

If people knew how hard I worked to achieve my mastery, it wouldn’t seem so wonderful after all.

Painters are not in any way unsociable through pride, but either because they find few pursuits equal to painting, or in order not to corrupt themselves with the useless conversation of idle people, and debase the intellect from the lofty imaginations in which they are always absorbed.

It is necessary to keep one’s compass in one’s eyes and not in the hand, for the hands execute, but the eye judges.

The true work of art is but a shadow of the divine perfection.

A great sculpture can roll down a hill without breaking.

The mind, the soul, becomes ennobled by the endeavour to create something perfect, for God is perfection, and whoever strives after perfection is striving for something devine.

A beautiful thing never gives so much pain as does failing to hear and see it.