Pablo Ruiz y Picasso, also known as Pablo Picasso (25 October 1881 – 8 April 1973), was a Spanish painter, sculptor, printmaker, ceramicist, stage designer, poet and playwright who spent most of his adult life in France. Regarded as one of the greatest and most influential artists of the 20th century, he is known for co-founding the Cubist movement, the invention of constructed sculpture, the co-invention of collage, and for the wide variety of styles that he helped develop and explore.

Among his most famous works are the proto-Cubist Les Demoiselles d’Avignon (1907), and Guernica (1937), a portrayal of the Bombing of Guernica by the German and Italian airforces at the behest of the Spanish nationalist government during the Spanish Civil War.

Picasso is not just a man and his work. Picasso is always a legend, indeed almost a myth. In the public view he has long since been the personification of genius in modern art. Picasso is an idol, one of those rare creatures who act as crucibles in which the diverse and often chaotic phenomena of culture are focussed, who seem to body forth the artistic life of their age in one person. The same thing happens in politics, science, sport. And it happens in art.

Born in Malaga, Spain, in October of 1881, he was the first child born in the family. His father worked as an artist, and was also a professor at the school of fine arts; he also worked as a curator for the museum in Malaga. Pablo Picasso studied under his father for one year, then went to the Academy of Arts for one year, prior to moving to Paris. In 1901 he went to Paris, which he found as the ideal place to practice new styles, and experiment with a variety of art forms. It was during these initial visits, which he began his work in surrealism and cubism style, which he was the founder of, and created many distinct pieces which were influenced by these art forms.

During his stay in Paris, Pablo Picasso was constantly updating his style; he did work from the blue period, the rose period, African influenced style, to cubism, surrealism, and realism. Not only did he master these styles, he was a pioneer in each of these movements, and influenced the styles to follow throughout the 20th century, from the initial works he created. In addition to the styles he introduced to the art world, he also worked through the many different styles which appeared, while working in Paris. Not only did he continually improve his style, and the works he created, he is well known because of the fact that he had the ability to create in any style which was prominent during the time.

In 1917, Pablo Picasso joined the Russian Ballet, which toured in Rome; during this time he met Olga Khoklova, who was a ballerina; the couple eventually wed in 1918, upon returning to Paris. The couple eventually separated in 1935; Olga came from nobility, and an upper class lifestyle, while Pablo Picasso led a bohemian lifestyle, which conflicted. Although the couple separated, they remained officially married, until Olga’s death, in 1954. In addition to works he created of Olga, many of his later pieces also took a centralized focus on his two other love interests, Marie Theresa Walter and Dora Maar. Pablo Picasso remarried Jacqueline Roque in 1961; the couple remained married until his death 12 years later, in 1973.

Work as a pacifist

Pablo Picasso was a pacifist, and large scale paintings he created, showcased this cry for peace, and change during the time. A 1937 piece he created, after the German bombing of Guernica, was one such influential piece of the time. Not only did this become his most famous piece of art work, but the piece which showed the brutality of war, and death, also made him a prominent political figure of the time. To sell his work, and the message he believed in, art, politics, and eccentricity, were among his main selling points.

Many things Pablo Picasso did during the 1950s, conflicted with the general public. Viciousness towards his children, exaggerated virility towards women, and joining the Communist party, were some of the many scandals which he was involved in during his lifetime. Although most of the things he did were viewed negatively by a minority of the general public, admirers of Pablo Picasso turned a blind eye, and still accepted him as a prominent figure in their society. Following the end of WWII, Pablo Picasso turned back towards his classic style of work, and he created the “Dove of Peace.” Even though he became a member of the Communist party, and supported Stalin and his political views and rule, Pablo Picasso could do no wrong. In the eyes of his admirers and supporters, he was still a prominent figure, and one which they would follow, regardless of what wrongs he did. He was not only an influence because of the works he created, but he was also an influential figure in the political realm.

Influence outside of art

Although Pablo Picasso is mainly known for his influence to the art world, he was an extremely prominent figure during his time, and to the 20th century in general. He spread his influences to the art world, but also to many aspects of the cultural realm of life as well. He played several roles in film, where he always portrayed himself; he also followed a bohemian lifestyle, and seemed to take liberties as he chose, even during the later stages of his life. He even died in style, while hosting a dinner party in his home.

Pablo Picasso was the most dominant and influential artist of the first half of the twentieth century. Associated most of all with pioneering Cubism, alongside Georges Braque, he also invented collage and made major contributions to Symbolism and Surrealism. He saw himself above all as a painter, yet his sculpture was greatly influential, and he also explored areas as diverse as printmaking and ceramics. Finally, he was a famously charismatic personality; his many relationships with women not only filtered into his art but also may have directed its course, and his behavior has come to embody that of the bohemian modern artist in the popular imagination. 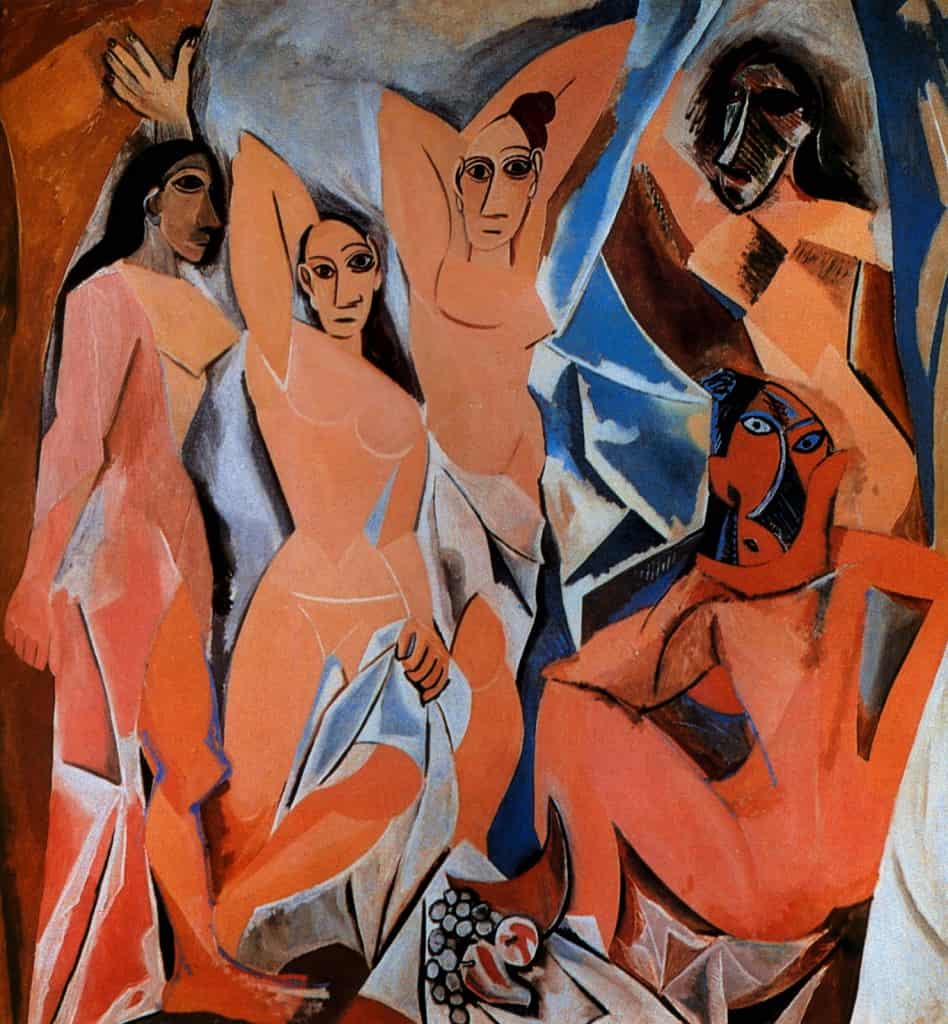 This painting was shocking even to Picasso’s closest artist friends both for its content and its execution. The subject matter of nude women was not in itself unusual, but the fact that Picasso painted the women as prostitutes in aggressively sexual postures was novel. Picasso’s studies of Iberian and tribal art that is most evident in the faces of three of the women, which are rendered as mask-like, suggesting that their sexuality is not just aggressive, but also primitive. Picasso also went further with his spatial experiments by abandoning the Renaissance illusion of three-dimensionality, instead presenting a radically flattened picture plane that is broken up into geometric shards, something Picasso borrowed in part from Paul Cezanne’s brushwork. For instance, the leg of the woman on the left is painted as if seen from several points of view simultaneously; it is difficult to distinguish the leg from the negative space around it making it appear as if the two are both in the foreground.

The painting was widely thought to be immoral when it was finally exhibited in public in 1916. Braque is one of the few artists who studied it intently in 1907, leading directly to his Cubist collaborations with Picasso. Because Les Demoiselles predicted some of the characteristics of Cubism, the work is considered proto or pre Cubism.
Oil on canvas – Museum of Modern Art, New York

Pablo Picasso is recognized as the world’s most prolific painter. His career spanned over a 78 year period, in which he created: 13,500 paintings, 100,000 prints and engravings, and 34,000 illustrations which were used in books. He also produced 300 sculptures and ceramic pieces during this expansive career. It is also estimated that over 350 pieces which he created during his career, have been stolen; this is a figure that is far higher than any other artist throughout history.

Pablo Picasso has also sold more pieces, and his works have brought in higher profit margins, than any other artist of his time. Several paintings by Picasso rank among the most expensive paintings in the world. In US currency, Garçon à la pipe sold for $104 million in 2004; Dora Maar au Chat sold for $95.2 million in 2006; Nude, Green Leaves and Bust was sold at $106.5 million in 2010; the 1932 work, which depicts Marie-Thérèse Walter reclining and as a bust along with the rest of a personal collection was valued at over $150 million in 2010.

Although he had a conflicting lifestyle, Pablo Picasso was admired by many, and was one of the most influential figures of his time. Not only during his life, but also after his death, he is still one of the most well known artists, and political figures, of his time. With thousands of pieces to his name, and art works which have been seen by millions, around the world, he has been a great influence to society, he has influenced the art world, and he introduced many new styles of art, which helped shape modern art, and modern styles artists follow today.

When I was a child, my mother said to me, ‘If you become a soldier, you’ll be a general. If you become a monk, you’ll end up as the pope.’ Instead I became a painter and wound up as Picasso.

Love is the greatest refreshment in life.

Everything you can imagine is real.

There are only two types of women – goddesses and doormats.

Only put off until tomorrow what you are willing to die having left undone.

I am always doing that which I cannot do, in order that I may learn how to do it.

Art is the lie that enables us to realize the truth.

Art washes away from the soul the dust of everyday life.

Picasso’s final words were “Drink to me, drink to my health, you know I can’t drink any more.”