Avant-garde Japanese artist Yayoi Kusama was an influential figure in the postwar New York art scene, staging provocative happenings and exhibiting works such as her “Infinity Nets”, hallucinatory paintings of loops and dots (and physical representations of the idea of infinity).

Yayoi Kusama was born in Matsumoto City, Japan in 1929. She studied Nihonga painting, a rigorous formal style developed during the Meiji period (1868–1912) to deflect the wholesale influence of Western art through the revitalization of the traditions of Japanese painting and their synthesis with aspects of Western art. Attracted by the experimental promise of the postwar international art scene, Kusama moved to New York City in 1958.

As a young struggling artist in New York, Kusama produced her first astonishing Net paintings in 1959—vast canvases measuring up to 33 feet in width, entirely covered in rhythmic undulations of small, thickly painted loops. The inherent philosophical paradox of these paintings—that “infinity” could be quantified and constrained within the arbitrary structure of a readymade canvas—combined with the more subjective and obsessional implications of their process, distinguish these works from Minimalist abstraction, which would dominate the New York art scene several years later. The mesmerizing, transcendent space of the Nets was further reinforced by Kusama’s own insistent psychosomatic associations to her paintings. She went on to develop other striking bodies of work, including the phallic soft-sculptures Accumulation, Sex Obsession, and Compulsion Furniture, which she later incorporated into full-scale sensorial environments. From 1967 she staged provocative happenings in various locations, from the New York Stock Exchange to Central Park to the Museum of Modern Art. Painting the participants’ bodies with polka dots or dressing them in her custom-made fashion designs, she created risqué situational performances that merged her inner artistic world with external realities.

In the early 1970s Kusama returned to Japan, where she began writing shockingly visceral and surrealistic novels, short stories, and poetry, including The Hustler’s Grotto of Christopher Street (1983) and Violet Obsession (1998). Later, in her art, she began to revisit earlier themes, including theInfinity Net paintings and Accumulation sculptures. In recent years she has continued to invent ingenious embodiments of infinity in dizzying walk-in mirror rooms and freestanding sculptures, such as Passing Winter—hand-beveled mirrored cubes that yield an abyss of endlessly repeating self-portraits to their viewers.

Following the success of her project for the Japanese Pavilion at the Venice Biennale in 1993—a dazzling mirror room filled with pumpkin sculptures, like an artful pumpkin patch over which she presided in magician’s garb—Kusama went on to produce a huge, vivid yellow pumpkin covered with an optical pattern of black spots as an outdoor sculpture. The pumpkin, like the infinity net, became a kind of alter ego for her. She has since completed major outdoor sculptural commissions, mostly in the form of brightly hued, monstrous plants and flowers, for public and private institutions including the Fukuoka Prefectural Museum of Art, Fukuoka, Japan; Benesse Art Site Naoshima, Japan; Matsumoto City Museum of Art, Matsumoto, Japan; Eurolille, Lille, France; and Beverly Hills City Council, Beverly Hills, California.

Kusama lives and works in Tokyo.

In the public imagination, Yayoi Kusama’s name is synonymous with polka-dotted fruit, immersive LED-lit installations, and the David Zwirner gallery show of 2013 that rivaled MoMA’s Rain Room (2012) as the buzziest art attraction of the season. A crop of prints made in 2011 and 2012 is currently on display at Ota Fine Arts in Tokyo; they are quieter than the flashier works for which she is known, and inspired recent works like her “My Eternal Soul” series.

To view these prints is to glimpse into Kusama’s creative mind, which is a thrilling, if overwhelming, exercise. Based on small paintings, the prints have in turn served as drafts for other, future paintings, teased out on a larger, often more-colorful scale. In girls AAA (2011), a whirlwind of purple eyeballs, red-dotted eyelashes, and bespeckled faces converges into a striking display of color and form. Profiles of female characters overlap and intermingle, each identity obscured by its own color-block, cartoonish rendering. Lips, strands of hair, and decorative details are tinged red-orange—a color that has come to be emblematic of Kusama herself (she dons a bobbed wig in the same color). Repeated motifs expand in all directions, and it’s not hard to imagine this image translating into a massive painting or social-media-friendly installation—all dizzying shapes and scintillating colors. 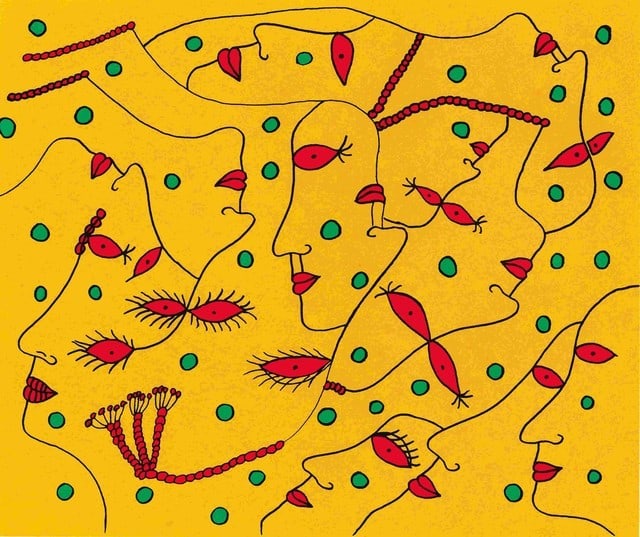 A tireless creator and innovator, Kusama uses printing processes that span from silkscreen and etching to embossing and stenciling. In Seeking the Beautiful Eyes (2012), the same sketched-up characters, spidery lashes, and cheerfully dotted forms appear. The print could read like a pop-y children’s book illustration, if not for its certain sinister, Tim Burtonesque edge. Clusters of red and teal beads outlined in black appear across the frame, like neurons engaged in synaptic activity.

While these prints don’t necessarily communicate a “cosmic vision” or prompt viewers to engage on the same immediate level as an immersive room of mirrors may, the images are pleasing in the same sensory-rich, unmistakably Kusama way. For dedicated fans and thoughtful visitors, viewing Kusama’s two-dimensional practice will be a rewarding, if amusing, exercise.

Yayoi Kusama is the matriarch of contemporary art – well known for her hallucinogenic works, she stands in the midst of a boundless visual universe merging with her radiant and riotous art, which is deeply personal, obsessive and affecting. To celebrate a major retrospective of the artist entitled In Infinity at the Louisiana Museum of Modern Art in Denmark, AnOther delves into the archives to find ten facts you might not know about the Japanese queen of colour and pattern. 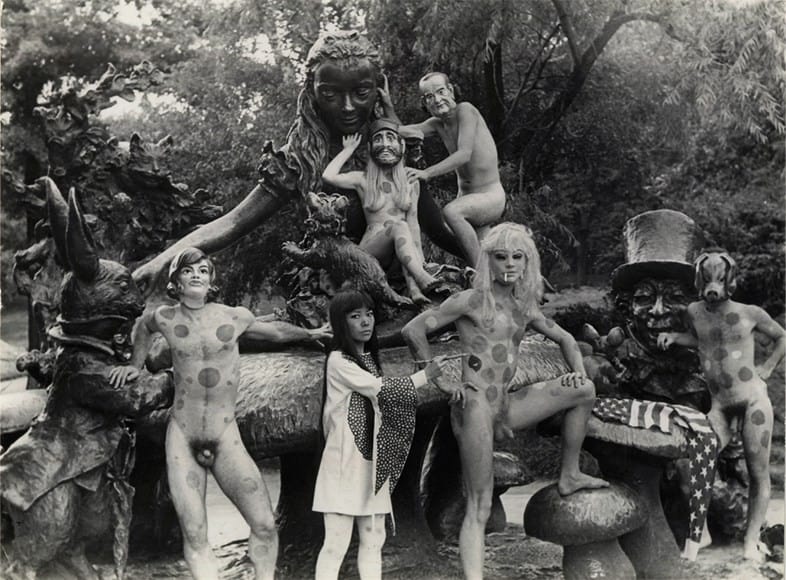 1. Kusama has a life-long obsession with fashion
In the 1960s she launched her own label creating patterned avant-garde clothes and costumes that featured heavily in her performances and happenings, and more recently collaborated with French fashion powerhouse Louis Vuitton, for whom she used her signature polka dot motif to decorate their iconic monogrammed handbags.

2. She has spent the last 37 years in a mental health hospital
After her business as an art-dealer in Japan folded, Kusama began experiencing severe mental health problems and checked herself in to a Japanese hospital where she has lived since 1977. From there, she has continued to create art, publish novels and write poetry, while maintaining a studio near the hospital for her large scale installations.

3. She views her recent paintings as diary entries
When overcome with a nightmarish hallucination, Kusama sits down at a canvas and begins to document the vision, completing the work in one sitting. The series are always completed on the same size canvas and create a visual log of her obsessive thoughts. Despite their bright colours, the works have titles such as The Far End of my Sorrow and All About Joy that show how underneath, she is deeply troubled.

4. Her education makes her nauseous
She left home for Kyoto Municipal School of Arts and Crafts in 1948 and studied Japanese art under the traditional Japanese Master-Disciple system, which she found rigid and uninspiring. She refers to her time in Kyoto as making her want to vomit. 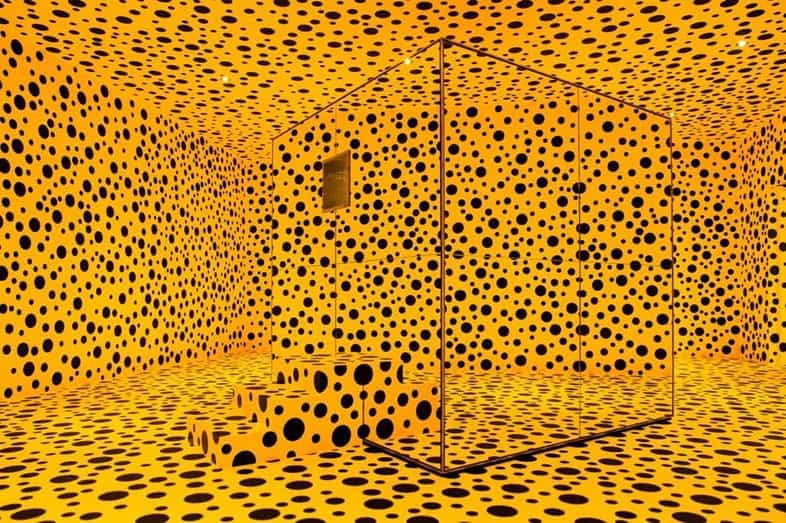 5. She refers to her polka dots as Infinity Nets
Since the age of ten, she has been obsessed with polka dots, covering at first her drawings, then later canvases, walls, household objects and even her assistants in them. She regards her mirrored rooms that are illuminated by hanging orbs as an extension of this – a type of immersive polka dot net that “obliterates” everything it covers through infinite space.

6. Georgia O’Keeffe was her business advisor
The famous flower-painting, female artist was business savvy and successful in the 1950s, and Kusama began writing to while in her 20’s asking for advice about how to succeed in the New York art scene. O’Keeffe even persuaded her own dealer to buy several of Kusama’s works when she was in a period of financial trouble due to being hospitalised from exhaustion.

7. In 1966 she was ejected from the Venice Biennale
At her first Biennale she exhibited her work Narcissus Garden, which consisted of hundreds of mirrored spheres that she began selling for $2 each while wearing a gold kimono – a comment on the commercialisation of art and self-promotion that didn’t sit well with the organisers of the Biennale and she was promptly escorted from the premises.

9. She has collectors frenzied
Kusama currently holds the record for the most expensive artwork sold at auction by a living female artist at $7.1 million in 2014 for White Net No. 28 (1960). O’Keeffe’s advice apparently paid off and Kusama has set a precedent for female artists in the 21st century. 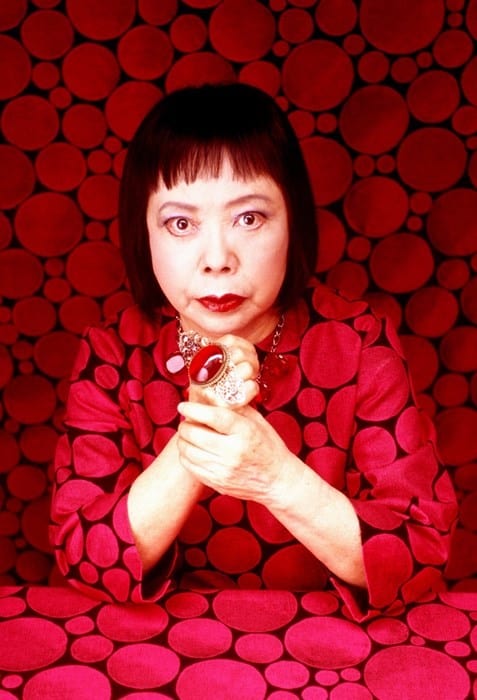 10. Spots saved her life
A conversation about Kusama wouldn’t exist without mentioning spots, and Kusama claims neither would she – she said without her art she would have committed suicide a long time ago, and refers to her spots as the overwhelming power in her life – famously saying, “One day I was looking at the red flower patterns of the tablecloth on a table, and when I looked up I saw the same pattern covering the ceiling, the windows and the walls, and finally all over the room, my body and the universe. I felt as if I had begun to self-obliterate, to revolve in the infinity of endless time and the absoluteness of space.”

I, Kusama, am the modern Alice in Wonderland.

My life is a dot lost among thousands of other dots.

I fight pain, anxiety, and fear every day, and the only method I have found that relieves my illness is to keep creating art. I followed the thread of art and somehow discovered a path that would allow me to live.

Every time I have had a problem, I have confronted it with the ax of art.

If it were not for art, I would have killed myself a long time ago.

I wanted to start a revolution, using art to build the sort of society I myself envisioned.

My mother beat me and kicked me on the derriere every day, irritated that I was always painting…When I left for New York, my mother gave me $1,000,000 yen and told me never to set foot in her house again.

My art originates from hallucinations only I can see. I translate the hallucinations and obsessional images that plague me into sculptures and paintings. All my works in pastels are the products of obsessional neurosis and are therefore inextricably connected to my disease. I create pieces even when I don’t see hallucinations, though.