Re-birth of the Renaissance?

“You can not solve a problem with the same mind that created it.” – Einstein

“I wish to work miracles.” “The knowledge of all things is possible.” – Leonardo Da Vinci 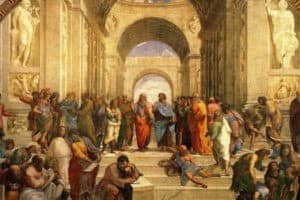 Where does the word “Renaissance” come from?

The word “Renaissance” comes from a combination of the French verb “renaitre”, meaning, “to revive” and the noun “naissance”, meaning “birth”. The revival of the classical ideal of human power and potentiality, the birth of the ideal of the Renaissance man or woman, might be just what is needed in our times. The Renaissance person combines a certain comfort level with both art and science, is computer and mentally-literate as well as globally aware.

In “A World Lit Only by Fire: The Medieval Mind and the Renaissance”, William Manchester claims that pre-renaissance Europe was characterised by…” a mélange of incessant warfare, corruption, lawlessness…and almost impenetrable mindlessness.” This description can easily encompass our so-called “dark age”, at present, despite our wonderful inventions of science and technology.

What discoveries and inventions were made during the Renaissance?

At the point of the birth of the historical Renaissance, personified by men like Leonardo Da Vinci, many inventions, and discoveries were also made. To name but a few – the printing press, which made knowledge available to the masses, allowing for dissemination and exchange of information, encouraging trade and travel and independent thinking. The “old authorities” (Church and King) could no longer dominate society. Growing consumerism and capitalism fuelled the cultural and intellectual transformations of the Renaissance.

The Industrial Age had begun, bringing with it new “authorities” and “gods”. Five hundred years after the Renaissance, the world is experiencing air travel, genetic engineering, space travel, unleashing the atomic bomb, etc. As we reach the Information Overload Age, we have given birth to ever-changing uncertainty and more possible options then we can choose from. A glut of junk, mediocrity, and garbage has become the sine qua non of our times. This leads to cynicism, alienation, and a sense of powerlessness.
In the desperate pursuit of happiness, as defined by this age (money, work, sex, i.e. measurables) have we lost sight of our “souls” (psyche)? Plato’s notion of the soul was what caused living things (empsucha) to be alive.

Science and technology have become the slaves of their master – the industrial paradigm. Humanities also have had to march to the beat of the drummer, by devaluing the creative mind and spontaneous ways of thinking. Logos rules over Poesies. The creative mind is charged with an ability to produce “concrete proof” in terms of statistics and numbers in order to be valid. Thus it slowly becomes neglected and shrivelled in our society.

What about an artist’s reputation?

An artist’s reputation rests on his ability to arouse commercial interest in his works of art, not on some intrinsic criteria of intellectual worth.

As Meister Eckhart, a Christian mystic, said, “In the creative moment we are generative as god is.” Creativity is the voice of Plato’s soul, the utterances of the Visionary. The creative act is one of expressing our authentic life, in which the creator and creature long to unite. The creative process in contrast to the scientific process requires one to fill the mind, then empty it, then get out of the way. It is not the sum total of checks and balances on an analysis sheet of information. It is a process of dreaming into reality, new possibilities.

If the creative longing is denied and twisted as it has been in our Industrial Age, the forces of creation turn to destruction. Misplaced or sublimated creativity produce a drive for power in which people use their energies for destructive purposes, in the pursuit of consumerism, as we push to feed and placate the “industrial gods”. Visionaries are forced to make a living on assembly lines.

Creativity, in visual arts, for example, has to date, only been valued as an aesthetic cosmetic, utilised in beautifying consumable artefact, including, advertising, the interiors of our dwellings, surgical procedures of human bodies and faces, etc. Creativity that speaks to our souls, de facto, not measurable, sellable, or consumable is devalued, except for serving the occasional entertainment purpose.

However, the human soul, although tiny, cannot be extinguished altogether without killing the body and the natural environment. At this crucial point in our existence, when we have suddenly awoken to the fact that we have consumed our way to near extinction, we are beginning to ask the question whether the soul can save us and how can we access it? Religion is one way, and many people are turning towards it’s traditional and new age forms, sometimes opening themselves to their souls but most times becoming more confused in the process, as the religious organisations have also been influenced by our Industrial Age ethics, having been raised by the same authorities with the same values.

A true meeting place of the sacred and profane can occur during the creative process, be it thinking or doing. A process that can open the imagination, in magical, unexpected ways, a process, at once mysterious and mystical, requiring the exploration of a different part or function of our brain.

Are we alive until we stop learning?

It is only natural that the evolution of the brain is an ongoing process outside the dominant control of humans. As Einstein said, “You can not solve a problem with the same mind that created it.”

Leonardo Da Vinci is a prime example of the Renaissance Man. He was an anatomist, architect, botanist, city planner, costume and stage designer, chef, humorist, engineer, equestrian, inventor, geographer, geologist, mathematician, military scientist, musician, painter, philosopher, and physicist. He was what we would call today a holistic thinker.

Pyotr Anokhin of Moscow University, a student of Ivan Pavlov, published in 1968, a research paper comparing the human brain to a “multidimensional musical instrument that could play an infinite number of musical pieces simultaneously”. He claimed that each of us has unlimited potential, and no one has explored the capacity of the brain to it’s fullest, except maybe Leonardo Da Vinci. Of course, other men come to mind, Albert Einstein, Isaac Newton, William Shakespeare, Michelangelo, Thomas Jefferson, etc.

Our university programs need to be able to give birth to renaissance men and women if our planet is to survive the devastation of the Industrial Age and redirect our lives to a New Age (as yet unspecified). Humans will be required to possess all the attributes of Leonardo Da Vinci and more. Whole-brain thinking, including recognition of interrelationships, cultivation of creativity and soul, with its uncertainty and unpredictability, emotional maturity, seeing behind phenomena and understanding how the highest aspirations, dreams, values and scientific discoveries can be integrated into our everyday lives.

“I wish to work miracles”, said Leonardo Da Vinci, and anything less in our times is too little, too late. Renaissance people like Leonardo, with strong curiosity impulses, did not think things were impossible, they had not been conditioned to think that way, so they went out and did the impossible.
What we need now is to teach students, the art of living, otherwise, our scientists will continue to theorise based on the information they possess at the time, without seeing the whole picture.

Art is the most sensitive and comprehensive expression of human thought. The time has come for the artist to take the responsibility of connecting every other human activity, from economy to politics, from science to religion, from education to behaviour.

Albert Einstein in his famous quote says, “The most beautiful thing we can experience is the mysterious. It is the source of all true art and science”. In the true spirit of “Renaissance”, we need to revive holistic thinking, the creative mind, and creativity that speaks to our souls.