Who Painted Portrait of the Duchess of Beaufort? Surprising Facts You Did Not Know About Thomas Gainsborough.

A Woman in Blue or a Portrait of the Duchess of Beaufort was painted by Thomas Gainsborough. 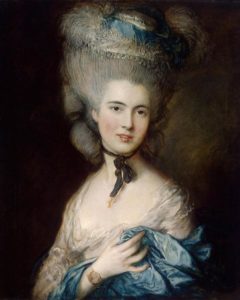 Portrait of the Duchess of Beaufort

And today we want to provide you with some interesting facts about this artist, so if you like them, please, place a comment below.

Well, here we will not retell you the biography of Thomas Gainsborough, it can easily be found on Wikipedia, so we did our own little research and found some fascinating facts we want to share with.

Thomas Gainsborough Hated Portraits…But He Painted More Than 800 of Them?

The Portrait of the Duchess of Beaufort is considered to be one of the best and most mysterious paintings of all time. It is hard to believe that the painter created more than 800 of them! He did dedicate his whole life to this and it amazes other people. But… Thomas Gainsborough was so sick of painting portraits of those high-society customers claiming that they were capricious… Well, how can you doubt that? Obviously,  a simple artist had to be on his best behaviour trying to make the ends meet.

He was paid approximately 60 pounds while you needed only 10 to rent some small studio apartment in the city or 40 for a luxurious one. He was one of those recognized during life artists.

He had his own view on art and was not a copy of someone else. He rebelliously rejected all the classical theories that his colleagues were following and he was constantly searching for new ideas. He did not like working with high-society but he somehow was inspired by them – he was working with lords and lovely ladies, dukes and duchesses, counts and countesses, whom he depicted in the bosom of his beloved nature. 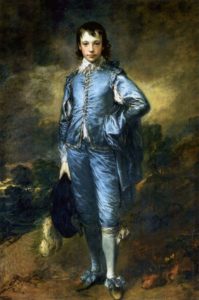 Gainsborough also got inspiration from theatres, he tried to visit them as often as possible, searching for new ideas to draw.

Thomas Gainsborough was pretty direct and did not belong to high society, he was from some small English town. That is why he often felt uncomfortable being close to “royalty”. Most of his time in London he was spending in his small room surrounded by brushes and easels, he rarely invited people to his studio. 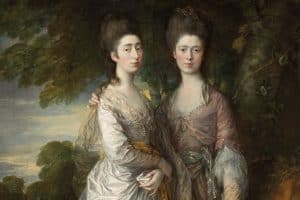 For example, when he was asked by one customer about a child’s skull lying on a mantelpiece, Gainsborough replied … that it was a very valuable thing! It was the skull of five-year-old Guy Julius Caesar!

Thomas Gainsborough Was Unhappy in Marriage

Thomas’s wife was fairly greedy and she was counting every penny he was making working hard from the dawn. He was a very successful painter during his life but he was miserable at home. His two daughters were having mental breakdowns and all this atmosphere made him want to leave everything and come back to his hometown where he had a happy childhood.